From the First to Twentieth Conference

The first gathering of experts who deal with railway vehicles ”Meeting on Railway Engineering” was held on October, 02-03 1984 in Niš, organized by the Faculty of Mechanical Engineering, University of Niš, and Machine Industry Niš. Direct reason for organizing this meeting was a double anniversary – a hundred years of existence of the railway in Serbia, and a hundred years of work of the Machine Industry Niš.

The initiator and president of the organizing committee was Professor Stojadin Stojičić.

As the initiator, founder and organizer of the first scientific meeting of Railway Engineering in this region Professor Stojičić founded the idea of the importance of gathering representatives of science and profession in the field of railways, and with further organization of next gatherings the idea of  the importance of continuity as well.

Professor Stojadin Stojičić, PhD (1930-1991) began his successful professional career in 1957, as a design engineer in the wagon factory GOŠA in Smederevska Palanka. Since 1962 he worked at the Technical Bureau of Machine Industry Niš. He was elected assistant professor at the Technical University of Niš in 1965 and until the end of his life he worked at the Faculty of Mechanical Engineering in Niš. In the period from 1973 to 1975, he served as the Dean of the Faculty of Mechanical Engineering in Niš. Professor Stojičić formed and organized teaching program at the Department of Railway Engineering at the Faculty of Mechanical Engineering in Niš. Along with the educational work in his career he actively collaborated with the industry where he designed and examined railway vehicles (diesel-hydraulic locomotives, wagons, etc.)

The first gathering of scientists and experts in the field of mechanical engineering and railways met the expectations. The developmental direction of the Meeting was defined. Summing the results, the main message of the first ”Meeting on Railway Engineering” was drawn – need for better coordination and cooperation between the railway operators, manufacturers, maintainers, academic and research institutions.

The fifth gathering was held in 1992. Since then, the Faculty of Mechanical Engineering has appeared as the main organizer. Once again the title was changed and it became ”Scientific-expert Symposium on Railway Engineering”. The next four gatherings got till then the broadest determinants ”Scientific-expert Symposium ENGINEERING OF RAILWAY VEHICLES”.

From the tenth meeting the concept has changed and ”Conference on RAILWAY ENGINEERING” has extended its action including a number of experts from the region and abroad, and thus transformed into a conference with international participation.

The following six conferences were held under the same title ”Scientific-Expert Conference on Railway ŽELKON/RAILCON” and with already established principles of organization. RAILCON Conference has become a recognized scientific-technical Conference on railways. With expanded content and thematic scope, and with the participation of numerous experts from abroad, RAILCON represents an important regional gathering of scientists and experts who observe the development of the railway in Serbia and achievements of railways in developed countries.

From the 2012, Conference has been organized as international. In line with that, the official language of the Conference is English and the actual title is ”INTERNATIONAL SCIENTIFIC-EXPERT CONFERENCE ON RAILWAY” – RAILCON.

Table provides a summary of information of all seventeen conferences, starting from the first ”Meeting on Railway Engineering” in 1984 until the seventeenth Conference titled RAILCON ’16.

Conference RAILCON ’20 was held as a hybrid conference offering the on-site and virtual versions due to Covid19 global pandemy. 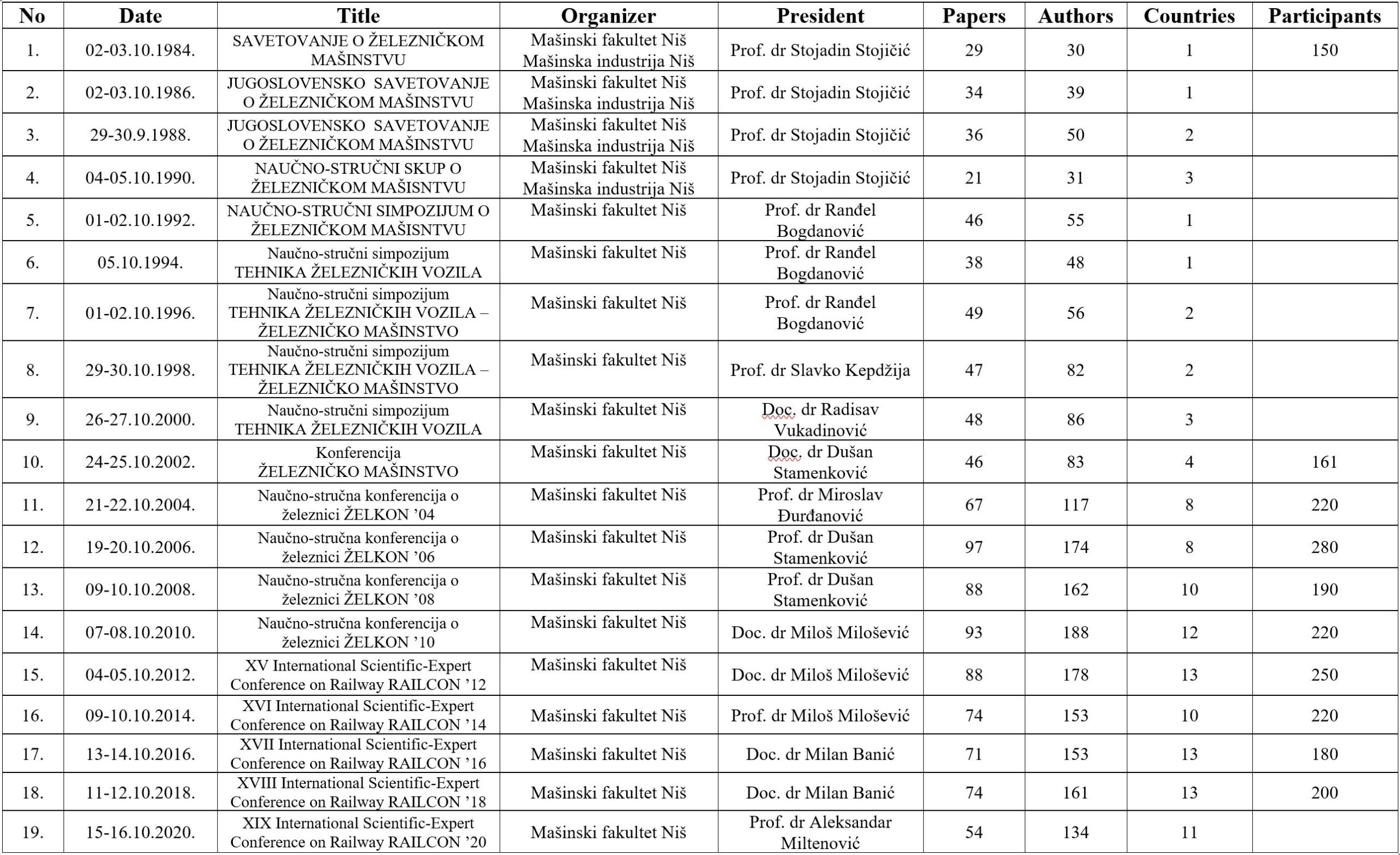 Patrons of the traditional gathering of scientists and experts from railway, university and industry were: Ministry of Science of the Republic Serbia, Serbian Railways and MIN Niš. The holding of these meetings has been enabled by many national and foreign companies and their financial support, such as: MIN Lokomotiva, Bratstvo, GOŠA, ŠINVOZ, ŽELVOZ (former Heroj Srba), TIGAR Technical Rubber Factory, Institute of Transportation CIP, Institute Kirilo Savić, Montenegro Railways, SIEMENS, ALTPRO, KONČAR Electric Vehicles, MIN DIV, Stadler, Kraiburg Strail, Thales, Opentrack, and many others.

Over the past 32 years, from the first meeting until now, in the areas of engineering, economics and politics changes were taking place. The Conference on Railway Engineering has survived, but it was transformed into a gathering that follows current trends in all areas of railway. In order to improve the gathering, some innovations were constantly introduced. Thus, from the XI Conference onward, thematic areas, apart from railway vehicles, have been extended to railway infrastructure, traffic and transport policy. Since 2004, the Conference has been known for its abbreviated name ŽELKON/RAILCON.

New section with title: “The Graduates and the Future of Railway“ was started up from the 2008 with an aim to get young professionals interested in the railways. Within this section, the successful graduate students’ theses from universities in the region have been presented. 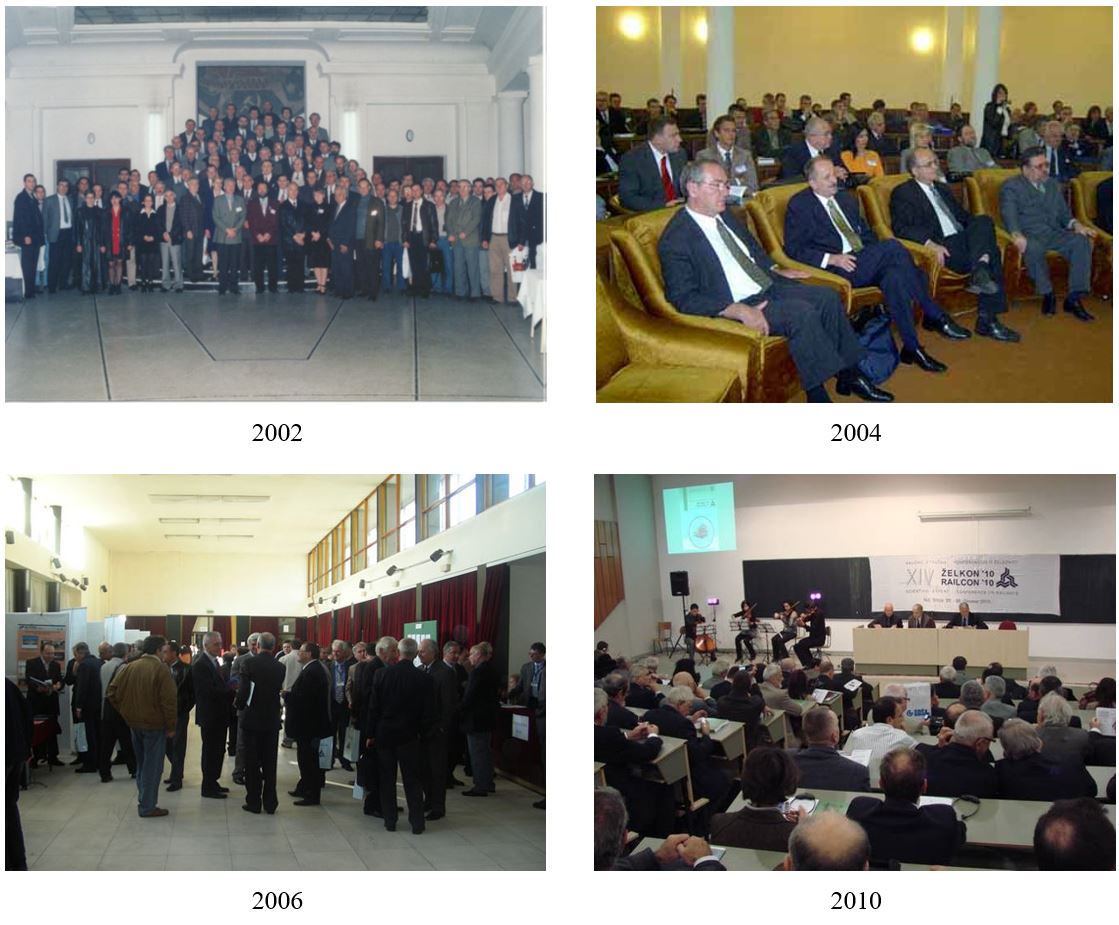 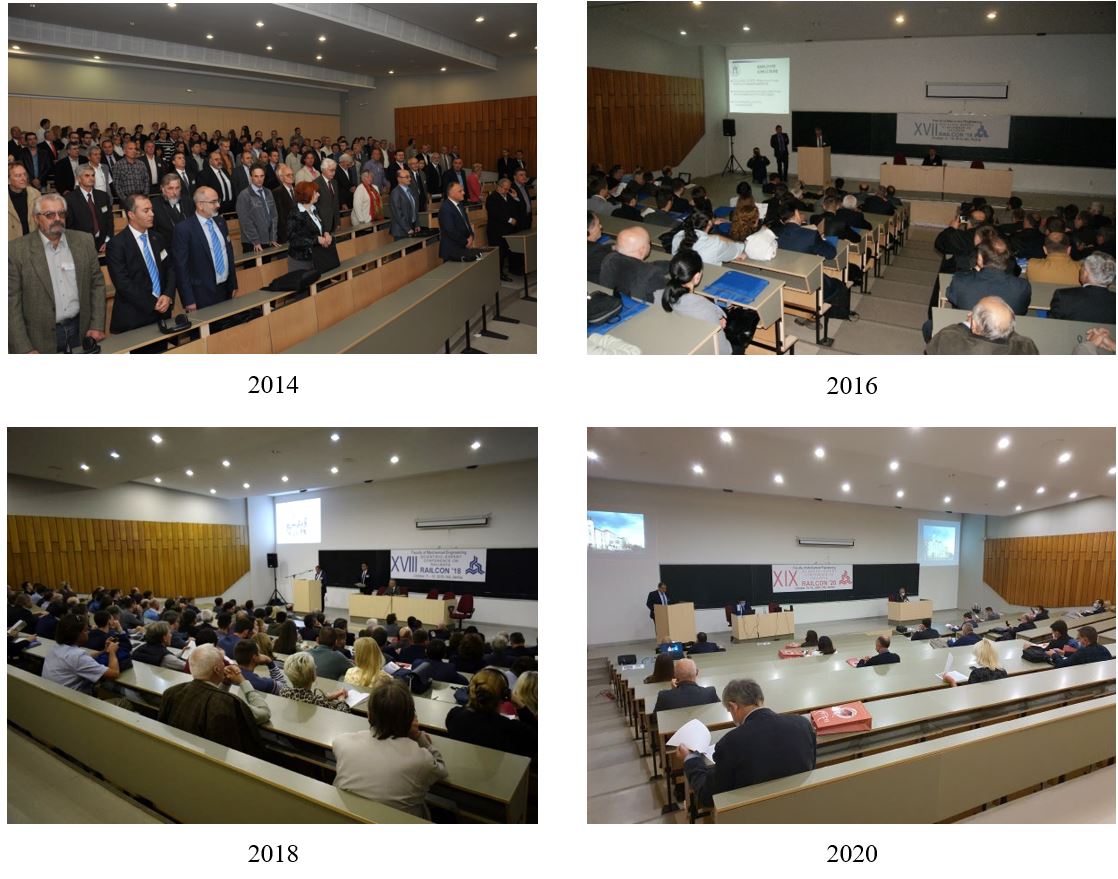 In the framework of the previous conferences, the Faculty of Mechanical Engineering published accompanying historical publications which in a special way deal with the history of rail traffic in our region:

These publications were published in Serbian language.

By selection of topics for the Plenary Sessions, Organizing and Program Committees have pointed out priority activities related to the development of railway in the country and in the region. Technological improvement of railway, regional integration processes, restructuring of the railway company into the market-oriented economic entity, sustainable development, joint and coordinated action of the relevant authorities, and the like, have had the primary significance.